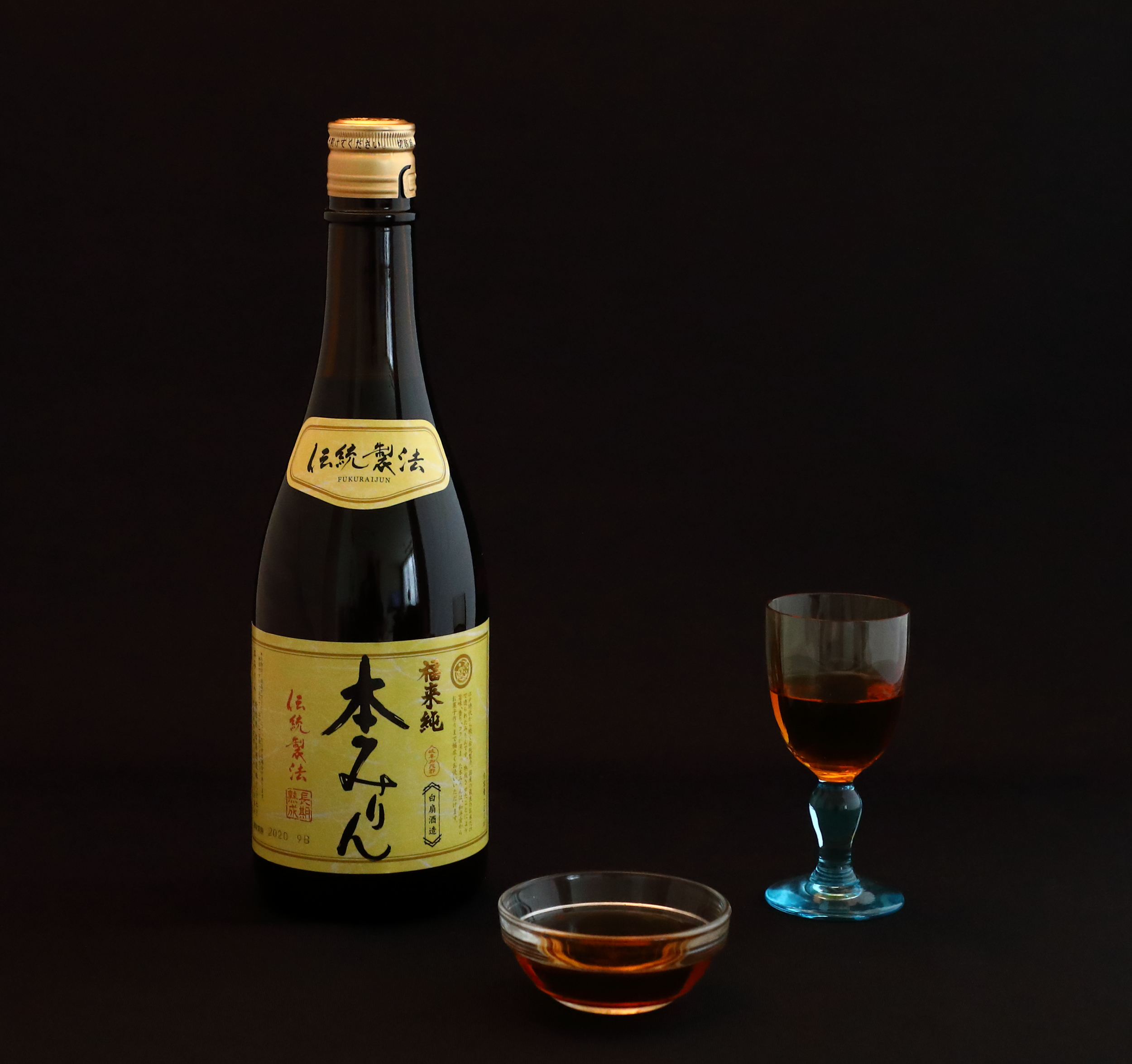 An aromatic, beautiful, and delicious full-bodied alcohol made from rice, artisanal hon-mirin has an essential role in the pantheon of fermented Japanese seasonings by virtue of its flavor-extending umami and complex sweet-savory flavors created by the Maillard reaction. It is also a delicious and healthy liquor to drink.

Hon-mirin, or true mirin, is traditionally made by combining, fermenting, and aging three forms of protein-rich and starch-laden types of rice ingredients: steamed glutinous rice (mochi-gome), cultured rice (kome-koji), and distilled rice liquor (kome-jochu). It is a delicious and compelling alcohol that is an essential kakushi-aji, or secret ingredient, in Japanese cooking because its unique culinary properties and range of rich flavors are key building blocks for making dishes light yet satisfying. With an alcohol content of around 14%, hon-mirin helps to purify aromas and tenderize foods. Being sweet, it balances saltiness and acidity in dishes.

But what makes hon-mirin special is the rich, creamy umami it develops during fermentation and the complex aromas, colors, and flavors it acquires during aging. Suspended in a slightly syrupy alcohol, its umami penetrates into foods and gives them mouthfeel, carrying and extending the flavors in a dish the way that fats and oils do in other cuisines. Aging generates a browning of the sugars and a Maillard reaction of the amino acids created from the rice during fermentation. Named for Louis Camille Maillard, a French chemist, who first described this phenomenon in 1912, the Maillard reaction produces new, rich and complex aromas and flavors. Depending on how long hon-mirin is aged it can have flavors similar to honey, butterscotch, caramel, maple syrup, chocolate, and coffee and also earthy, and meaty ones. These flavors are usually created in dishes when searing and roasting meats and cooking foods for long periods of times.

There are only thirty artisanal brewers of hon-mirin left in Japan, and they produce about 330,000 kiloliters annually, which is equal to 1% of the mirin (the word used for a broad range of commercially-made products) on the market. The varieties of hon-mirin made by Hakusen Shuzo, a 170-year-old, family-run brewery located in the small town of Kawabe in the foothills of Japan’s southern Alps in Gifu prefecture, are among the best. They are made using high-quality, locally grown rice and soft spring water. In addition, Hakusen makes each of the key components, including the distilled rice liquor (kome-jochu), and also ages its hon-mirin for longer periods than most other artisanal brewers. Its “Fukuraijun” hon-mirin (shown in the title block above) is aged for three years and its “Koko” hon-mirin for ten years. Full-bodied and extremely mellow, they both have beautiful aromas and colors and distinct flavors. “Fukuraijun” is a rich gold color and has a buttery, toasty, light caramelized flavor. “Koko” is a dark reddish-brown and has richer, more intense flavors. It has a savory almost meaty aroma but a taste that is sweet as well as savory and slightly smoky.

Kawabe is located about an hour by train from Nagoya City, which was the epicenter of fermented food production during the Edo period (1603-1868). Sake, mirin, vinegar, soy sauce, miso, and pickles were all made here in large quantities to fuel the food desires of the era’s growing urban middle class and support the refinement of Japanese cuisine that took place during this time. Nagoya was the center of Japan’s fermented food culture for a variety of political, logistical, and culinary reasons. It was the home base of the Tokugawa clan that unified Japan in 1600 and then went on to rule the country until 1868. In addition, Nagoya had a large port located roughly midway along the length of the Japanese archipelago, enabling easy shipment of its food products to anywhere in the country. Most importantly, the city is backed by the Japanese Alps whose mountain people relied on fermented foods to get them through the harsh winters. The difference in temperature between the area’s cold winters and warm summers also created ideal conditions for fermentation.

Currently led by fifth generation Yuki Kato, Hakusen Shuzo was founded in 1850 by an ancestor who was a traveling salesman of household goods who married the daughter of a Kawabe sake brewer. Instead of joining her family’s business, he began making hon-mirin across the street from their sake brewery. At the time, hon-mirin was an expensive liquor mainly drunk by high class women for its vitamins and other health properties; especially its aid to digestion (hon-mirin is full of the active enzymes known today as pro-biotics). Presumably they also enjoyed it because of its deliciously sweet and gently intoxicating flavors. Chefs at refined restaurants in Kyoto and Tokyo did use hon-mirin but typically only as a glaze on specialty grilled dishes, such as eel kabayaki and chicken teriyaki. The high heat of grilling induced a further Maillard reaction of the hon-mirin and gave these foods a rich, complex, and lustrous coating.

It was not until after the Second World War, when new alcohol tax laws made mirin cheaper, that mirin became commonly used in cooking. At one time there were 3,000 licensed mirin makers in Japan. But competition and industry consolidation led to a steep decline in the number of brewers as well as the quality of mirin, and nearly all the mirin made and used today in Japan is little more than alcoholic liquid sugar or almost completely artificial. These include products called shin-mirin, mirin-fu, and aji-mirin (new mirin, mirin-like, and tastes like mirin), which are mainly mixtures of water and sugar with an alcohol content of 1%; hakocho-miryo (mirin-type condiment), a fermented facsimile of mirin made from starch syrup, water, and sake or some other alcohol added to give it an alcohol content of 5-14%; and other imitations that call themselves hon-mirin but are commercially made in large batches and have glucose, fructose, corn syrup, and processed amino acids added to speed up the production process. All of these products have salt in them so that they are undrinkable and are not technically a liquor and therefore are cheap (they are not subject to an alcohol tax) and can be sold in supermarkets.

In addition to their obvious deficiencies, these products lack hon-mirin’s key attributes of naturally fermented umami and the complex flavors produced by aging. Due to their disagreeableness, most people in Japan do not think of mirin as a drink anymore, and most self-respecting cooks do not use it, preferring instead honey or maple syrup to add sweetness, flavor, and shine to a dish and sake to gain the cooking and flavor benefits of alcohol and umami. However, these substitutes are no match for hon-mirin’s creamy umami and complex flavors and ability to make light dishes very satisfying and rich dishes even more complex.

Hakusen survived the industry’s consolidation, unlike most of its peers, because of the quality of its products and also because it makes a variety of alcohols. In 1900, Hakusen began making sake and later on further diversified into making shochu. All of its liquors are full-flavored and delicious, and like its hon-mirin, its sake and shochu, including the rice shochu which it uses to make its hon-mirin, have unique flavors that are distinct tastes of place.

Hakusen’s process of making hon-mirin is largely done by hand following the recipe that was developed over time during the Edo period. Initially, around the year 1500, hon-mirin was made with rice, amazake, and sake. Over time, the rice was replaced with sticky glutinous mochi rice because it has more starch that can be converted into sugars. The amazake was replaced with rice koji to deepen hon-mirin’s flavor and facilitate a strong, umami-generating fermentation. The sake was replaced by distilled rice shochu to further deepen hon-mirin’s flavor and, most importantly, to allow for long aging because its alcohol content of around 25% makes it a better preservative than sake, which typically has an alcohol content of 15%.